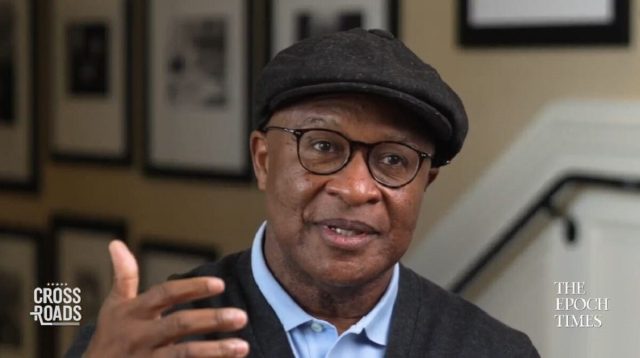 When Maurice Washington was growing up, practically everybody he knew was a Democrat.“Everybody in your family, your neighbors—they were all Democrats,” Washington, executive chair of the Charleston County Republican Party, said on Epoch TV’s “Crossroads” program.Washington recalled his father, a sanitation worker, dying when he was 9 years old.

His mother told her children that they would have to grow up faster.“So different values developed for me and my nine siblings, following mom’s step, working and investing in self and mind and not relying on government to pull you out,” Washington said.

“I tried to be a Democrat, more or less to stay in connection with other African Americans. It just didn’t work out. I always felt odd speaking the values that she instilled in us, and it was never really embraced by the Democratic Party. And so it led to the change and where I’m at right now.”

Washington served on the Charleston City Council throughout the 1990s before being elected by the South Carolina General Assembly to the South Carolina State University Board of Trustees. He was elected to his current position last year

The Republican Party believes in: ‘we’ll give you the tools, we’ll level the field, we’ll allow you to determine how high you rise or how low you remain,’ where self-reliance becomes the driving force. As I see the Democratic Party, its: government is your best pathway forward.

Not you, but government will take care of you. Become reliant on us and everything will be okay. Well, if you look at that policy, it has led to the highest percentage of unemployment of African Americans, the lowest level of wage earners, the highest nongraduates of high school and colleges—it’s just not working.

So we need something a little different. And I think that little different that we need is offered in part by the Republican Party.”Despite splits in the GOP between supporters of former President Donald Trump and those who oppose the ex-commander-in-chief, Washington sees the party as a big tent one that welcomes different ideas, visions, and perspectives.

The party, he added, should ultimately pull in the same direction.“So some differences along the way, but not the kind of differences that would ultimately cripple the party. And we have to work hard at ensuring that ultimately, it doesn’t hurt our candidate or the party brand,” he said.Washington also believes Trump should retain a role in the GOP.“If we think about it, he left us in pretty good shape. We control the redistricting process literally across America. So we have a chance to and we should win back the House in 2022 as a result of controlling the district lines.

No one is focusing on that. We may have lost the presidency, but we made what a plus 13-14 gain in the House of Representatives. We are now at a break-even point in the Senate. But all of this could change in 2022, as a result of the Republican Party from South Carolina, literally, to California, controlling the redrawing of those congressional lines,” Washington said.

So I think he left us in pretty good shape. If we don’t blow it—if we don’t blow it—and when you package that with 75 million votes, 10 million above and beyond the 2016 numbers, I would say that he has a pretty big voice still in the party going forward.”

Source: Former Democrat Explains Why He Joined the Republican Party