Last week, the Wall Street Journal broke what should be viewed as the top media story of the past decade… at least. In a story headlined Trump Call to Georgia Lead Investigator Reveals New Details, the Wall Street Journal published a verbatim transcript of a telephone call between President Trump and the chief election fraud investigator for the office of the Georgia secretary of state, Frances Watson.

The alleged contents of this conversation had been part of the national conversation ever since January 9 when Washington Post reporter Amy Gardner published a story claiming, based on a single anonymous source, that President Trump had attempted to pressure Ms. Watson into creating evidence of fraud where all right-thinking people know that all voting in Georgia, especially in Fulton County, was totally on the up-and-up.

The story blew up. It slid neatly into the Pantheon of Evil Acts By Trump worshiped by the left, the media, and NeverTrump. Through the miracle of journalisming, something we lay folks can’t be expected to understand, the anonymously sourced story was quickly and independently confirmed by NBC, ABC, USA Today, PBS, and CNN.

When President Trump was impeached after leaving office for giving a speech on the National Mall on January 6, this unsourced, though now multiply “corroborated,” allegation found its way into the “impeachment brief” submitted by the House “impeachment managers,” see page 10 if you care to wade through this dross. And, they, relying upon that integrity and sense of fair play for which progressives are famous, even used it in their impeachment arguments.

Continue Reading Here: The Washington Post Has Outed Their Source for the Bogus Trump Phone Call Story and It’s Time for CNN and Others to Do the Same – RedState

Rudy Giuliani: H.R. 1 ‘Destroys Any Possibility of a Fair Election

Source: H.R. 1 ‘Destroys Any Possibility of a Fair Election’: Giuliani

For show notes, visit https://bongino.com/ep-1478-debunking-liberal-tax-hike-madness This show is brought to you by Express VPN https://www.expressvpn.com/bongino Biden is about to blow up your tax bi

Word:: There was no insurrection on Jan 6,2021. Not one single person involved in the Capitol Bldg break in had a weapon. There were THOUSANDS of people attending the rally. It was like any of the other Trump rally’s-probably 100-where his supporters held a peaceful assembly. In some instances these people were brutally attacked just for attending a MAGA rally. There were Democrat held cities where they had to call off a scheduled rally due to threats of violence against the Trump supporters. I remember when they had to re route Trump’s entrance with Secret Service just to avoid his being attacked at one of his own rally’s. I have plenty of pictures and video if you need proof.

So much for the right to a peaceful assembly. We watched a real insurrection all summer long in 2020 with Antifa and BLM while Trump was in the White House. i remember Biden, Harris, Schumer ,Pelosi, the media and other Dems supporting it. The whole idea was to resist and get Trump out of office. They were burning down cities, vandalizing federal property, attacking police and innocent bystanders/ They tried to attack the White House while Pres Trump was inside. There’s the insurrection. Pres Trump should have called in the military. He didn’t.

Newsflash: we’re law abiding citizens who believe in the rule of law. Trump’s platform was based on law and order. We support our police. We support our military. We love our country. We think the world of our Constitution. We just work hard, pay our taxes, try to get along in this world. We want to know why our capitol now looks like Baghdad. There isn’t going to be an insurrection. Nobody is calling for an attack in DC. Sure you get a few kooks here and there but that’s always been the case .I’ve been around quite awhile and i didn’t think i’d live to see the day there was a military presence in our capitol with barbed wire and fence guarding it from its own people. Somebody’s paranoid over an imaginary future insurrection by our own citizens. I can understand why the events that day we’re frightening to the people inside but let’s not blow it out of proportion either. Their over reacting is an understatement.

Biden, Pelosi and Schumer – it’s time to send our military where it’s REALLY needed. Our border is in crisis. There’s a major invasion by illegals pouring into our country. It’s YOUR responsibility to secure that border and protect us. We won’t be having an insurrection but keep it up and we will be voting every single one of you out of office.

This is the message i’m leaving for Biden; or more likely his handlers since he’s really just their front guy. I’m trying to be nice here. When i call i intend to get the point across.

In a clear and long-overdue slap-down of the German bishops and their dreadful “synod” process, today the CDF released the text of a response to a dubium (that doesn’t happen as often as we would like, does it…) about “blessing unions of persons of the same sex”. HERE  And article about the response HERETO THE QUESTION PROPOSED:Does the Church have the power to give the blessing to unions of persons of the same sex?RESPONSE:Negative.Then there is an explanation. What does it come down to?

“God] does not and cannot bless sin”. 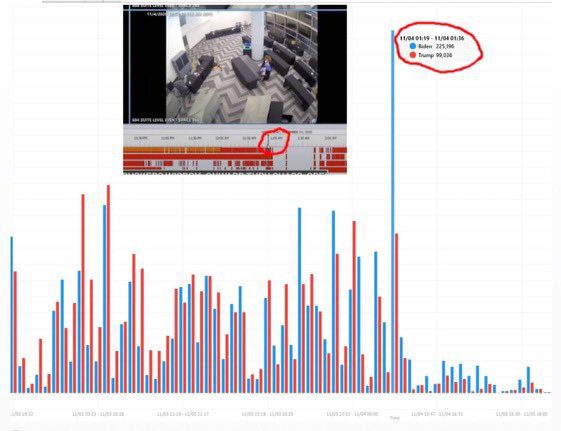 In November a Georgia poll watcher noticed the suspicious shift in votes from President Trump to Joe Biden while monitoring the interim election results on the Georgia secretary of state website.Voter GA co-founder Garland Favorito swore in an affidavit in November with the secretary of state’s office that, “I concluded from looking at these results that this was an irregularity since there was no obvious reason for President Trump’s totals to have decreased while former Vice President Biden’s totals increased dramatically.”Favorito continued to research the Dominion voting machines fluctuations and “glitches” and found more evidence of votes being switched from President Trump to Joe Biden elsewhere in the state.

A new report exposes just how bad the border crisis is under Joe Biden — and it is worse than most people may have thought.The Department of Homeland Security issued a statement that acknowledges the situation on the southern border is a state of emergency.It indicates FEMA is now supporting DHS’s handling of Biden’s border crisis.“Homeland Secretary Alejandro N. Mayorkas has directed the Federal Emergency Management Agency (FEMA) to support a government-wide effort over the next 90 days to safely receive, shelter, and transfer unaccompanied children who make the dangerous journey to the U.S. southwest border,” the statement read.Continue reading…https://conservativebrief.com/emergency-statement-36654/

Analysis of cable news ratings in the first two months of Joe Biden’s fraudulent presidency reveal that Tucker Carlson has largely retained his audience, with other cable news hosts losing a significant percentage of their viewers. Primetime shows on CNN and MSNBC have suffered from a precipitous ratings decline, in some cases losing more than a quarter of their total viewers.CNN has suffered the greatest loss of cable viewers since Biden’s ascension to the presidential throne by Fraud. Nielsen analysis indicates that Don Lemon has lost 32.5% of his nightly audience, with Anderson Cooper and Chris Cuomo losing 32.2% and 28.5% respectively.