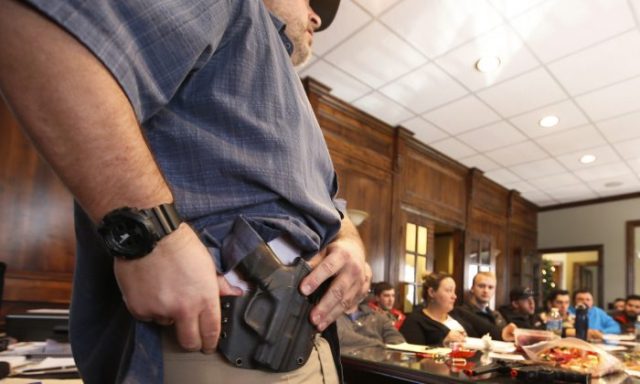 House lawmakers in Idaho have passed a bill that would let some school employees carry concealed firearms without the need for school board permission.

In a 52-18 vote on Thursday approving the measure—called House Bill 122 (pdf)—lawmakers moved to expand the ability of school staff members to carry weapons on school grounds, which under current law requires a nod from the school board.

While some Idaho school boards already allow staffers to carry, Rep. Chad Christensen, a Republican who sponsored the bill, said that it shouldn’t be up to officials to make determinations about constitutional rights.

“I know in the past this has been an issue about local control,” Christensen said, according to Idaho Ed News. “I don’t like any government to restrict our constitutional protections. This is a Second Amendment issue. For me, the Second Amendment right doesn’t stop at the door of a school.

”If the provisions of the bill become law, the carrier would be required to inform the school’s principal and the district superintendent. Those school officials may share the information with the school board, but the identities of the employees carrying weapons would remain confidential.

The bill states that no school employee can be compelled to tell anyone else about the concealed firearm. Staffers also can’t be subject to retaliation or disciplinary action for carrying a firearm.Schools also would not be allowed to include signs that say they’re a “gun-free zone.”

The law would apply to both public and private schools, but private property owners—including owners of private school buildings—can still ban weapons on their property.Backers of the bill said it would help protect kids in schools in the event of an active shooter scenario by providing an extra line of defense.

Greg Pruett of the Idaho Second Amendment Alliance, who backed the bill, said it’s unlikely police can get to the scene of an active shooting in time to prevent a gunman from taking lives.