Constitutional law professor Jonathan Turley argued that the idea that former President Donald Trump not testifying in front of the House can be used against him in his trial “contradicts not just our constitutional principles but centuries of legal writing.”

“Presidents have historically not testified at impeachment trials. One reason is that, until now, only sitting presidents have been impeached and presidents balked at the prospect of being examined as head of the executive branch by the legislative branch,” he wrote for Fox News on Feb. 7.

“Moreover, it was likely viewed as undignified and frankly too risky. Indeed, most defense attorneys routinely discourage their clients from testifying in actual criminal cases because the risks outweigh any benefits. Finally, Trump is arguing that this trial is unconstitutional and thus he would be even less likely to depart from tradition and appear as a witness.”

“Despite the historical precedent for presidents not testifying, Raskin made an extraordinary and chilling declaration on behalf of the House of Representatives,” Turley said. “He wrote in a letter to Trump that ‘if you decline this invitation, we reserve any and all rights, including the right to establish at trial that your refusal to testify supports a strong adverse inference regarding your actions (and inaction) on Jan. 6, 2021.’”

All House Democrats and 10 Republicans voted to impeach Trump for allegedly inciting an insurrection over his speech to supporters on Jan. 6 in the midst of the Capitol breach. Trump explicitly said during the rally that demonstrators should peacefully make their voices heard.

According to Turley, Raskin’s statement also implied that “Trump needed to testify or his silence is evidence of guilt” and that “under this theory, any response other than conceding the allegations would trigger this response and allow the House to use the silence of the accused as an inference of guilt.”

“The statement conflicts with one of the most precious and revered principles in American law that a refusal to testify should not be used against an accused party.”

The scholar, who offered testimony during the first impeachment inquiry in 2019, noted that the Constitution’s Fifth Amendment declares that “no person … shall be compelled in any criminal case to be a witness against himself.”

“It is true that this is not a criminal trial. It is a constitutional trial. As such, the Senate should try an accused according to our highest traditions and values. That includes respecting the right to remain silent and not to have ‘inferences’ drawn from the fact that (like prior presidents) Trump will not be present at the trial or give testimony,” he said.

Raskin’s office didn’t respond to a request for comment by press time. 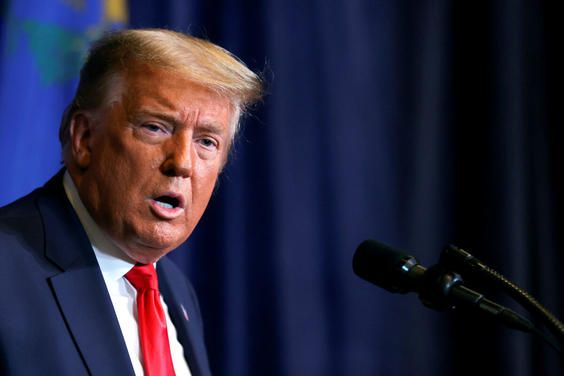 What is the latest report on the status of the coup in Burma?

Internet access restored as protests in as Myanmar[Burma] protests grow.

The growing protests are a sharp reminder of the long and bloody struggle for democracy in a country that the military ruled directly for more than five decades before loosening its grip in 2012. Suu Kyi’s government, which won a landslide election in 2015, was the first led by civilians in decades, though it faced a number of curbs to its power under a military-drafted constitution.

Most people think of a coup as being similar to the one in Burma;meaning Pres Trump was not removed from office by our military so it could not have been a coup. He was supposedly voted out in an election, hijacked by the very people who tried to remove him from office at least twice. Once,when he took office, by accusing him of being a Russian agent who colluded with the Russian government to win and a 2nd time by impeachment for a phony charge of a quid pro quo with Ukraine. They were also considering an attempt to invoke the 25th amendment which they must have reconsidered for some reason.

The Russia Hoax went into a 3 yr investigation which they were hoping he would shut down so they could charge him with obstruction of justice; then they could say he was actually guilty of the first accusation. Well, he didn’t shut down the investigation so that plan went out the window. However, several things happened along the way. First, they intimidated and arrested some of the people on his campaign with the intention of getting them to lie about him .Two, they tied his administration up for 3 yrs and damaged his reputation in the process. To this day there are some people who still believe the hoax.

Let’s remember that this was all a coordinated effort among the Obama/Biden admin, the DOJ,FBI, State Department, Hillary Clinton, the media(meaning cable news, NYT, Washington Post et al and social media such as Facebook and Twitter)and some Republicans. That is, people in his own party who wouldn’t mind his being ousted. Later, Antifa and BLM would figure into the plot.

i’ve said all along that it begs the question;what WOULDN’T they do to keep Trump out of office.

What’s amazing is that the people who bought the debunked Russia Hoax when it had no evidence believe you must have a tin foil hat on if you even question the integrity of the 2020 election.

The coup began in 2016 and finally succeeded with the rigged election in 2020.No,you do not have to have military involvement to pull off a coup. Yes, it’s how it takes place in most countries but not always.There have been exceptions. A military takeover-or attempt-makes the biggest headlines though because it’s usually violent or ends in violence. It would not have worked here anyway because Trump was the sitting President. The Pres is also the CIC of the armed forces. He certainly wouldn’t use the military to remove himself. DUH*

How do i know we had a coup? 1. they had been trying it all along; from the day he was sworn into office. The first plot began before he took office and that was in 2015. 2. there are red flags all over the place. Suppression of speech, censoring of specific persons and news stories, arresting certain people associated with Trump while criminal acts by the coup plotters are covered up. 3. the Democrats set up the public so they wouldn’t notice the election was rigged; only the people who were really paying close attention knew what they were up to. 4. NOW they have ADMITTED it. Anyone read the Time magazine story where they openly bragged about it? They used some verbal engineering to make themselves sound crafty and legit.

“Another focus of this campaign was to convince the public that election results would be delayed, perhaps for a number of days. These efforts were designed to condition the voting public to not expect, or even accept, an outcome on election night. As the article notes, the “organization’s tracking polls found the message was being heard: the percentage of the public that didn’t expect to know the winner on election night gradually rose until by late October, it was over 70 percent. A majority also believed that a prolonged count wasn’t a sign of problems.”

There were plenty of problems including the fact that this was a coup. You can use verbal engineering any way you like but this was a coup designed to keep a duly elected President from taking office and installing an illegitimate one-Joe Biden.

You know the other way i know this was a coup in the United States? Look at what the Democrats are doing NOW. They are usurping the Constitution again. It means nothing to them.

They convinced you Trump was a dictator? He was the person you had to fear least,if at all.

*the DUH is for liberals who keep saying Trump was going to use the military to overthrow the government. The explanation is for them.