I would love to vote for his re-election NOW if it were possible! Nothing is going to change my mind. Totally committed to voting Trump Nov 2020 & people who will support him.The statement certainly rings true in our home. 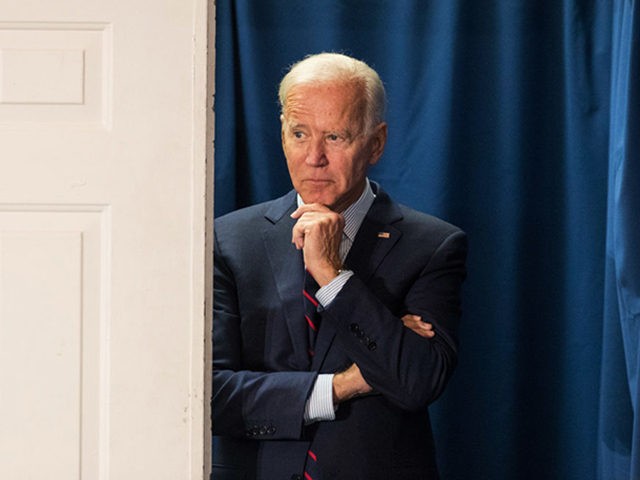 An objective look at the latest polling proves the Impeachment Hoax is backfiring against Quid Pro Joe Biden.

Obviously, it was not supposed to be this way. Democrats and their establishment media allies were certain they had crafted a silver bullet that would accomplish two things at once: 1) doom President Trump’s re-election chances, and 2) shield Old Joe from the fact he and his son are guilty of looting China and Ukraine.

As of this writing, Trump sits at a relatively healthy job approval rating of 44.1 percent per the RealClearPolitics poll of polls. That’s only a single point lower than when the media and Democrats launched their Impeachment Hoax.

The Impeachment Hoax has backfired spectacularly on Slow Joe.

As the media and Democrats…

CIA snitch Eric Ciaramella filed a whistleblower complaint on August 12 over President Trump’s July 25 phone call with Ukrainian President Zelensky where the two discussed ferreting out corruption.  This included talk on investigating the Biden crime family. Ciaramella was not on the call. He just heard about it and his report was filled with inaccuracies.** The so-called “whistleblower” Eric Ciaramella is a Democrat who had a “professional” tie to a 2020 Democrat.** Ciaramella  coordinated and took guidance from Adam Schiff’s staff and Schiff lied about it.** Schiff’s staff recommended attorneys for the so called “whistleblower.”** Ciaramella was kicked out of the White House for leaking negative stories about Donald Trump in 2017.***Get Trump 2020 buttons @ TrumpButtons.com – Click Here***** Trump-hater Ciaramella was behind the fake story that Putin told Trump to fire Comey — a COMPLETE FAKE NEWS STORY from 2017!** Ciaramella’s attorneys worked for James Clapper, Hillary Clinton, Chuck Schumer, and donated to Joe Biden.** An attorney for Ciaramella is a member of the #Resistance.** Ciaramella  worked with Joe Biden in the executive branch when he was Vice President.** Ciaramella had no problem with the Joe Biden and Hunter Biden’s million dollar pay-for-play scandal with Ukraine.** Ciaramella traveled with Joe Biden to the Ukraine.** Ciaramella worked with DNC operative Alexandra Chalupa in the creation of the Trump-Russia collusion hoax.** A former associate of James Clapper, Charles McCullough, assisted Ciaramella with his complaint against Trump.** And Adam Schiff’s aides, Abigail Grace and Sean Misko worked with Ciaramella in the White House.** Eric Ciaramella was a guest of Joe Biden to a luncheon with the Italian Prime Minister in 2016.** And as The Gateway Pundit reported earlier today Eric Ciaramella hosted the White House meeting in January 2016 when Ukrainian officials were told to get rid of the prosecutor investigating Hunter Biden and Burisma.This is why Adam Schiff does not want Eric Ciaramella’s name mentioned during the public testimony this week.

“When once a Republic is corrupted, there is no possibility of remedying any of the growing evils but by removing the corruption and restoring its lost principles; every other correction is either useless or a new evil.”

I, for one, have grown weary of Sen. Lindsey Graham (R-SC), appearing on every other talk show bloviating about spygate, Ukrainegate, collusiongate, and all the wrongs committed against the Trump presidency and then doing nothing to fight back other than getting his face in front of the camera. Lindsey, do your job or get off the pot — call some hearings, as you promised, and go for the Democrat’s jugular. Show that passion you showed during the confirmation hearings for Supreme Court Justice Brett Kavanaugh when you went on an epic rant against that bevy of Democratic presidential wannabes who were raising the politics of personal destruction as they shredded the presumption of innocence all Americas are supposed to enjoy.

Will be perfectly honest, i happen to have a lot of respect for Lindsey,especially for his staunch support of Bret Kavanaugh during an especially trying confirmation hearing.He was very helpful in getting the nomination through.I didn’t always agree with Sen Graham back in the day but i believe he acted-albeit wrongly sometimes-on principle. Graham also has a fantastic sense of humor; that’s his one saving grace when he’s campaigning.

That said,If it were possible i’d grab hold of Graham and shake the hell out of him or give him a good slap upside the head and say snap out of it man. Of course,i can THINK about doing that but to actually do it,only if i’d want to get arrested and jailed. NO can do. You get the point though.

Word to you Senator Graham:

You go on the cable news networks and announce that you’re going to do this,this and this then keep your word or you start to look like all talk. Eventually people are no longer going to be impressed and realize they’re being played. It isn’t going to help your re-election campaign either,not even with your sharp wit. These are serious times. Our duly elected President is under assault. They will do anything to remove him from office. it’s time to step up to the plate and take these corrupt people to task.You’re an extremely intelligent man. You can’t be missing the boat here. Redeem yourself Lindsey.

President Trump will rock the house in Bossier City, LA to help Eddie Rispone win the Governors seat! Get out and Vote Saturday!

Get your popcorn, drinks ready as our President slaps the media and Democrats silly! 💞🇺🇸💞🇺🇸💞 pic.twitter.com/DXR8E1HR1X

Wow – This was a well orchestrated coup ..this explains a lot -Brennan should be worried ..

The deep state, according to Senator Chuck Grassley, is working overtime to stop the release of the FISA report, which will expose the entrapment and soft coup orchestrated against Donald Trump by the Obama administration’s FBI and DOJ.

Grassley is frustrated at the delay of the report, and thinks that the deep state has deliberately slowed its release.

The Daily Caller reported:Republican Iowa Sen. Chuck Grassley expressed frustration Monday at a months long delay in the release of the Justice Department Inspector General’s report on possible FBI surveillance abuse against the Trump campaign, questioning whether the “deep state” has somehow slowed the release of the document.

“All of the delays and excuses why the Horowitz IG FISA report isn’t public yet after several months of anticipation of its issues leads me to the suspicion it’s going to be ‘deep six’ by the deep state,” Grassley wrote on Twitter.

All of the delays and excuses why the Horowitz IG FISA report isn’t public yet after several months of anticipation of its issues leads me to the suspicion it’s going to be “deep six” by the deep state— ChuckGrassley (@ChuckGrassley) October 22, 2019

The bureau relied heavily on the unverified Steele dossier in applications for the warrants, as well as for the main investigation into possible collusion between the Trump campaign and Russian government.

Christopher Steele, a former MI6 officer, dug up dirt on the Trump campaign on behalf of the DNC and Clinton campaign [which, most fo the information was fed to him directly from Nellie Ohr, according to some experts].

In the dossier, he alleged that Trump aides, including Page, worked with Kremlin operatives to influence the 2016 election.Steele also claimed that there was a “well-developed conspiracy of coordination” between the Trump team and Russians.

But the special counsel’s report undercut much of the dossier. It said there was insufficient evidence to establish a Trump-Russia conspiracy.The OIG report was initially expected to be released in June, but has been steadily delayed amid new developments, including an interview that same month with Steele.

Horowitz told several congressional committees on June 25 that the investigation was nearing completion. He submitted the report to the Justice Department and FBI for a declassification review on Sept. 13.

Fox News reported in October that disagreements between the FBI and Justice Department about redactions in the report have delayed the release of the document.

Grassley has been one of only a handful of Senate Republicans to push for answers from the FBI and Justice Department about the Steele dossier and other surveillance against the Trump campaign.

He was chairman of the Senate Judiciary Committee until earlier this year, when he took over as head of the Senate Finance Committee.Horowitz’s office has not responded to recent requests for comment about the status of the report.

Horowitz has been working on a report documenting the FISA [Foreign Intelligence Surveillance Act] abuses by Obama’s corrupt DOJ and FBI during the 2016 election targeting Donald Trump.

“It’s as thick as a telephone book,” Sunday Morning Futures host Maria Bartiromo recently said. “More than just FISA abuse.”Sara Carter reported:Horowitz’s investigation on the bureau’s probe into the now debunked theory that Trump colluded with Russia in the 2016 presidential election will more than likely result in the declassification of documents — requested by senior Republican lawmakers for more than several years.

These are the same documents President Trump turned over to Attorney General William Barr in May, giving him ‘full and complete authority” to declassify.

Those documents will contain several classified pages of the Foreign Intelligence Surveillance Act on former Trump campaign advisor Carter Page, exculpatory evidence that was withheld from the Foreign Intelligence Surveillance Court, the so-called ‘Gang of Eight’ folder (which contained exculpatory information), as well as the email chain between FBI investigators in the Russia probe and then-FBI Director James Comey.

Those emails also include discussions with lawyers in the DOJ’s national security division.

As previously reported, the email chains will contain information that prove the FBI knew prior to obtaining a warrant to spy on Page that former British spy Christopher Steele’s information in his infamous dossier on Trump could not be proven.

Horowitz’s report is also expected to reveal what TGP has reported on many times — that the FBI knew dossier author Christopher Steele (who was also used by the FBI as a CHS) was leaking to the media, but then used those leaked media reports as ‘evidence’ in their FISA warrant applications — this is known as circular intelligence reporting.

In other words, the FBI used its own leaked false information as ‘evidence’ to justify obtaining FISA warrants on Carter Page rather than independent intelligence gathered from other credible sources.

It will confirm reports that Hillary Clinton received a debriefing from the FBI on foreign attempts to infiltrate her camp, something the FBI never offered the Trump camp.Horowitz last month sent a 2-page letter to Capitol Hill updating lawmakers on his impending report on FISA abuse.“I anticipate that the final report will be released publicly with few redactions,” Horowitz wrote.