My friends daughter is missing. Walked away from school at 8am hasn't been seen since. In Casa Grande, Arizona. If you know or see her can help you can dm me or call the casa grande police 15204218700 please pray 🙏 patriots. I've never asked for a retweet but I'm begging now pic.twitter.com/Y2F6dLAOVm Fake Indian and 2020 Dem hopeful Elizabeth Warren on Tuesday called for impeachment proceedings against President Trump from the Senate floor.

Senate Judiciary Committee Chairman Lindsey Graham is overruling everyone and going directly to the Supreme Court in an attempt to end the harassment against President Donald Trump.

The last thing the world needs is more of Robert Mueller’s commentary, but Congress is determined to have him hold forth at a public hearing.It isn’t as though we don’t already have the special counsel’s version of events.

He mustered enormous investigative resources and took two years to write a 400-page report that is available to the public and presumably carefully written (although not necessarily carefully thought through).

That should be enough for Mueller to stand on — and enough for Congress to make a decision to ­impeach or not impeach, or otherwise dispose of the matter as it sees fit. Instead, Mueller is going to be asked to expand on his already expansive report that not only blew through Justice Department regulations but inverted the longstanding burden of proof in the Anglo American legal tradition.

As a prosecutor, Mueller’s sole job was to decide whether or not the president was guilty of a crime. He declined to do this, choosing ­instead to write a nearly 200-page volume on obstruction cataloguing what he found in the course of not making the only decision he was supposed to make.

The relevant regulations say at the conclusion of the special counsel’s work he or she “shall provide the attorney general with a confidential report explaining the prosecution or declination decisions reached by the special counsel.”On obstruction, Mueller reached no such decision, and he didn’t write a confidential report, either — his report was clearly meant for public consumption.

Besides that, he’s a sticker for the rules.“Mueller’s action,” Jack Goldsmith of Harvard Law School writes at Lawfare, “seems inconsistent with what the regulations tried to accomplish, which was to prevent extra-prosecutorial editorializing.”

Worse, as Trump’s special counsel, Emmet Flood, set out in an excoriating letter, by stipulating that the evidence prevented him “from conclusively determining that no criminal conduct occurred,” Mueller stood the presumption of innocence on its head.By Mueller’s standard, the prosecutor doesn’t have to prove guilt, the target has to prove innocence. If the target doesn’t, he will be disparaged in a quasi-indictment spelling out why he wasn’t exonerated.

If anyone not named Donald J. Trump were subjected to this new prosecutorial standard, it would occasion widespread comment and — one hopes — consternation.

There is, no doubt, public value in Mueller’s report, but he wasn’t supposed to be a free-floating ombudsman or truth commission. If Congress wanted to create one of those and charge it with running down every lead related to Trump’s alleged obstruction, it could have. Under the regulations, though, the special counsel is only “to exercise all investigative and prosecutorial functions of any United States attorney.”

Now, Congress wants Mueller to compound the offense by speaking publicly. It doesn’t want facts from him. They are already in the report. It wants opinions and sound bites, especially any embarrassing to the president. Congress wants him to spend a couple of high-profile hours further “not exonerating” the president.

If Mueller had a proper understanding of his role, he would decline the invitation and perhaps write a letter giving his version of events regarding his interactions with Attorney General William Barr, which became such a flashpoint last week.

Fact is, Mueller and Congress have a symbiotic relationship. For two years, Mueller was acting as, in effect, the lead counsel for an impeachment inquiry, bizarrely housed within the executive branch, while Congress wants to use his moral authority as a crutch at a time when it is vulnerable to charges of partisan overreaching.

This, too, is not supposed to be how the system works. But we are long beyond anyone caring. For a swath of the political world and much of the media, all that matters is that Mueller “not exonerate” Trump, and the more, the better, in whatever format or forum.

The 1960’s,early 70’s were a turbulent period in American history.

It was a time when the SDS(Students for a Democrat Society),broke up;part of which went  into a group called the Weather Underground led by William Ayers and (future wife)Bernadine Dohrn. 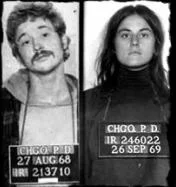 The catalyst-or their excuse would be more appropriate-was their objection to the Vietnam war.There were other groups,probably less organized and less radical that had the same goals in mind. The split with the original SDS was a difference in opinion on how to achieve the same goals.

The Weather Underground didn’t rule out violence. Truth is,they were anarchic and like many groups of that period Marxist influenced.
The baby boomers were persuadable and happened to be in large numbers.They were against ‘the man’ until they became ‘the man.’
Andrew Breitbart had a few things to say about them:

Take the time to look them up someday. The Weather Underground Manifesto can be found online.[ BTW,An original copy is worth a ‘few’ bucks ].So we don’t end up on a rabbit trail I’ll save it for the end.
He understood that the Occupy Movement was the same as the anti war movement of the 60’s and we should understand that ANTIFA is the Weather Underground of our current time.
The ideology is basically the same. It’s Socialism/Marxism/Communism. The left/liberalism has always tended to lean that way.Show me otherwise.
Keep in mind there is a Communist Party of the United States. It’s never been able to get too much of a stranglehold since we’re still the 2 party system of Democrats and Republicans;that is,until they managed a take over of the Democrat Party.
Since Socialism has become the talk of the town, so to speak, we can ask the question:
what has the Communist Party been up to since Donald Trump was elected?
We better take this seriously.Socialism/Marxism has gotten a foothold.I make no distinction between the 2. Neither does the Communist Party.
Just as they did in the 60’s they want to reach the youth vote.
Don’t take my word for it. Here is what they had to say

We’re not going backwards to socialism but forward to a socialism 2.0, a working-class led majoritarian movement of class struggle that favors the expansion of democracy in every direction.
As many of you can probably imagine, the youth of the Communist Party USA has had no break since the election of Donald Trump to the U.S. presidency in 2016. Since then, over 3,000 new members have joined our ranks; mostly under the age of 35. The excitement over socialism has been put forth by Bernie Sanders’ presidential campaign, Alexandria Ocasio-Cortez’s #GreenNewDeal proposal and Trump’s announcement in early February that, “America will never be a socialist country”.

Evidently they took his words as a challenge.
You’ll recognize some recent themes as they go on:

In addition to building and participating in the broader leftist movement against Trump and the extreme right, the CPUSA youth recently hosted a National Marxist School in Chicago which was attended by 40 comrades in person and hundreds more online. There we explored the classics by Marx, Engels and Lenin and put our science of Marxism-Leninism into practice upon arrival back to our home states and cities. Our youth was active in the November elections which saw the election of the most diverse House of Representatives in U.S. history. Muslim women of both Somalian and Palestinian background were elected. Two Native American women were elected. LGBT persons and self-identified socialist candidates were elected. This is progress, comrades.

Our youth is active in the fight for rent control and affordable housing. Our youth is active in the demonstrations and online campaigns which demand #MedicareForAll, free college tuition and an end to families being separated at the border. Yes, families separated at the border; children locked in cages. If this isn’t fascism rising, I don’t know what is.

You had the feeling that the large protest/resist groups we saw in the streets were not organic,right? Well, you were right.

The #MeToo movement is also another movement that our comrades, both male and female, have taken up arms in as well. Since Anita Hill’s testimony in 1991 against Clarence Thompson to Christine Blasey Ford’s testimony last fall, it is clear that capitalism seeks to not only silence women but to also dismiss them as liars and traitors to our pathetic excuse for a democracy. This is what it is like to live in the belly of the imperialist beast, comrades.

They identify what we have noticed ourselves:

And it is the generation that polls show increasingly favors socialism, with more 18 to 29 year olds favoring it – 49 percent – than oppose it, 43 percent.

They are socially progressive, racially tolerant, environmentally conscious and strongly in favor of LGBTQ equality. Young people today are less religious, and more civic minded than their predecessors.

They are ready to take advantage of the persuadable. It’s the generation that has a huge college debt they are going to be saddled with; it is a group that free college,free health care,free everything is the most appealing to. They’ve been indoctrinated enough over the years that they no longer have the traditional values past generations have had to fall back on.The Communist Party is well aware they have an opening.
The baby boomers either returned to those traditional values or they totally rejected them and became the persuaders like William Ayers & Bernadine Dohrn,Bernie Sanders,Elizabeth Warren, Hillary Clinton. Socialism 2.0,Democrat Socialist all sounds better.There was a time even those terms would not be acceptable. Today,not so much.It didn’t happen over night,but it happened. We didn’t think we’d ever have to make a decision for or against socialism in the United States of America. We thought, not here.(They probably thought the same thing in Venezuela). Eventually it will be revealed as Communism/Marxism.They will go one step at a time until we’re willing to accept what we once believed was outside the mainstream.
Donald Trump was sharp.He threw down the gauntlet. He brought them out in the open.
There’s a lot at stake here.Fortunately the Democrat candidates are weak. Keep in mind though the left knows that. They have one choice. Destroy President Trump. We have a choice too. Fight back and make sure our beloved President is re-elected. He can’t do it alone. He’s only 1 man & there’s a lot of forces allied against him.As weak as the Democrat field is we can’t take it for granted that the left won’t weaken Pres Trump enough to make it an even fight.The one thing they might be able to do well is turn out the vote.It means we have to work twice as hard to turn out the vote for him & the right people in Congress. Another year of the Democrats in the majority is another year of chaos and the theater of the absurd.They can’t take crazy much further.I’m not done talking about these issues either. Consider future posts re the Communist/Democrat Party and their campaign against Pres Trump to come up.We really have to consider how they slithered into our body politic,our culture,academia and media(especially cable news networks).We better plan on how to defeat them.
Source,ALL quoted material: COMMUNIST PARTY USA
NOTE: Hillary Clinton is going to run again. Take it to the bank.

As promised, the Manifesto of the Weather Underground: SDS PRAIRIE FIRE REPRINT 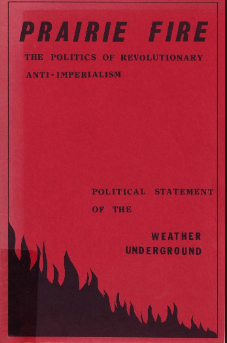 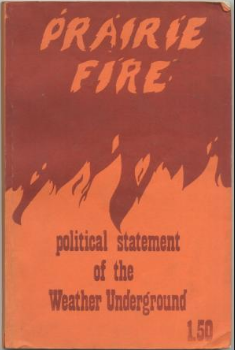