.@JudicialWatch Sues FBI for Records of Meeting Set up By Andrew Weissmann with AP Reporters about Manafort Investigation. Weissmann, an anti-@RealDonaldTrump activist, went on to become Mueller #2. https://t.co/n18iX9kcgl

Goldberg didn’t run from the questions, she stood there and explained herself as best she could and it was challenging to say the least but the entire video is engaging 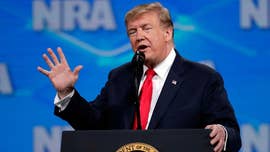 The announcement Saturday that Oliver North is stepping down as president of the National Rifle Association has sparked overwrought media speculation that the NRA is in danger of shutting down. It is not.

Source: John Lott: NRA turmoil is not a threat to Second Amendment but THIS could do real harm | Fox News

Obvious political games are afoot when House Judiciary Chairman Jerry Nadler is more interested in the testimony of Attorney General Bill Barr about the Mueller report, while simultaneously ignoring author of the report, Robert Mueller, himself.

#AceNewsReport – Apr.29: A Coptic church in Upper Egypt is closed after a throng of angry Muslims attacked it this month, beating a priest and another Copt as more than 200 fearful children who had gathered for Bible lessons looked on, according to advocacy groups: One of the injured Copts, Asaad Bakheet Rezek, told Coptic TV (CTV) that a Muslim about 17 years old beat one of the priests with a club as security forces led him from the Anba Karas Church building in Naga al-Ghafir, Sohag Governorate in southern Egypt: The priest, identified as Father Basilious, sustained a minor head injury as security forces escorted him and another priest into an armored vehicle after the chanting mob tried to enter the building, Rezek said, adding that the children were terrified by the club- and knife-wielding crowds as they shouted, cursed and pelted the building with rocks……..The attack on the Christians was instigated by the village mayor who “accused the Christians of “treason” for the renovation, and called for “neighbors to take action against the church.

Source: (CAIRO, Egypt.) A Coptic church in Upper Egypt attacked it this month, beating a priest and another Copt as more than 200 fearful children who had gathered for Bible lessons looked on, according to advocacy groups: Police arrested no one and took the both Father Basilious & Father Bakhoum in for questioning issuing an indefinite closure order, pending investigations, and froze all activities of the 10-year-old church, including the its daycare and the Sunday School #AceNewsDesk reports | Ace News Services