the best assembled panel that i have ever seen. It’s a don’t miss! If they could have gotten Tom Fitton too it would have been killer.

In a bombshell interview on Fox News Wednesday night, prosecutor Joe DiGenova predicted that former CIA Director John Brennan was in so much trouble, he would need not one lawyer, but five. Brennan was at the top of the slow coup attempt to oust President Trump, using a phony dossier and lies to judges in order to get warrants to spy on Trump and others.

Here is a summary of what DiGenova told Mike Huckabee, who was guest host for The Ingraham Angle:

Armed Militias Are Not a Far Right Phenomena

Local militias have a long history of assisting federal agents in protecting U.S. borders. The group United Constitutional Patriots, a New Mexican militia, came under fire after a video was posted on the group’s Facebook page of them detaining 300 illegal immigrants until the arrival of Border Control, which sparked the ire of the ACLU.Rather than fighting for the rights of American citizens, the ACLU lodged complaints against the group that ultimately ended in the weaponization of the FBI and the arrest of a 69-year-old veteran and leader on federal weapons charges.

PayPAL and GoFundMe immediately followed the attack on the militia by banning the group from its platforms, crippling the group’s ability to fund its operations.The militia group has a long history of working to assist Border Control in New Mexico, and what the headlines failed to mention is that the video starts in the middle of the incident with U.S. Border Patrol vehicle and agents already at the scene.

Their “crime?” Other than arresting the leader on federal weapons charges, one of the militia members can be heard on video saying, “This is an invasion … and it is never, never ending” referring to the large number of Central American migrants crossing into the United States to seek “asylum.”

Clearly, the actions of the ACLU and big tech socialists politicized the group’s activities. The militia had been working with Border Control for several months, assisting the agency with detaining illegal immigrants because Congress failed to do its job and President Trump has refused to send armed troops to the border.

Look forward to seeing everyone in Indianapolis, Indiana tomorrow! https://t.co/3soeEjsMA3

Peter Strzok told us that he would “love to answer each and every one of [our] questions” once the Mueller investigation concluded.

The investigation is over. Time to bring Strzok and the rest of the Comey Cabal back in to get those answers. pic.twitter.com/0cJUVCvh1W

It’s time to figure out what the Comey Cabal did at the start of the fake “Russia collusion” investigation.

Each of them were either fired or demoted and left the FBI. 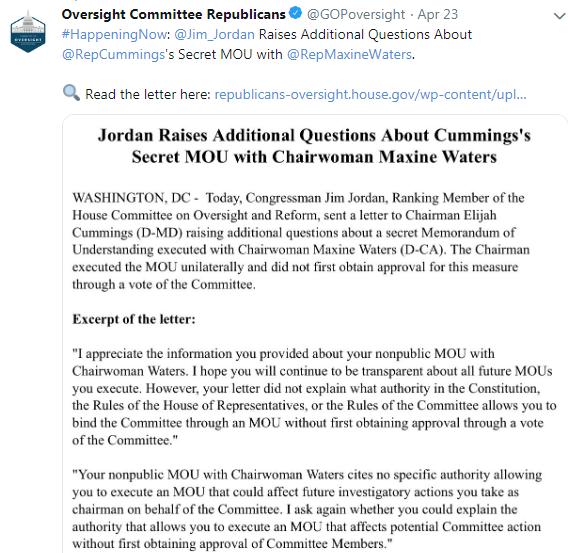 On Nov. 3, 2020, President Trump will be reelected to a second term. That is unless Republicans serving in Congress and in state houses throughout the country mess it up for him by capitulating to the Bernie Sanders agenda.It is up to Republicans to support the president and shine a bright light on the Democrats’ repeated efforts to pull America toward socialism. It is up to Republican leaders — senators, representatives, governors — particularly in the battleground states — to have President Trump’s back and frame the election on the terms he defined during his State of the Union address in February:

Everything after March 9th, 2016, is a function of two intelligence units, the CIA and FBI, operating together to coverup prior political surveillance and spy operations.Prior to March 9th, 2016, the surveillance and spy operation was using the NSA database to track and monitor their political opposition.  However, once the NSA compliance officer began initiating an internal review of who was accessing the system, the CIA and FBI moved to create ex post facto justification for their endeavors.

Both tracks held the same coverup purpose; both tracks were insurance policies; and both tracks merged for intelligence exploitation after President Trump won the election.  After the election the goal was shifted to remove the risk Trump represented.

EVERYTHING After March 9th, 2016 Was A Cover Up Operation

Source: President Trump: “It is now just a question of time before the truth comes out, and when it does, it will be a beauty!”… | The Last Refuge