AND he said he didn’t know that
Christopher Steele was passing information to Bruce Ohr, who was giving it to the FBI.

This is what it looks like when a country slowly gives up all of its rights in favor of a globalist agenda—an agenda packaged as “progressive” by a complicit mainstream media.

America will never bend to the will of the global elites or their #FakeNews media. https://t.co/idxXTHoLsR

President Trump informed the media today that his chief of staff John Kelly will leave the White House by the end of the year, and there will likely be an interim replacement. UPDATE: Video Added 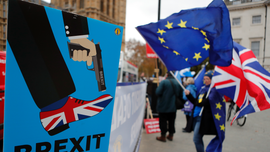 Work and Pensions Secretary Amber Rudd was the first minister to publicly discuss a “Plan B” should May be defeated in a key parliamentary vote scheduled for Tuesday.Rudd, who backs May’s Brexit deal, said “anything could happen” — including a second referendum — if the government is defeated in Parliament, and predicted a chaotic period.

She told the Times on Saturday that while none of the possible alternatives is better than the current Brexit deal, she would prefer a model similar to that of Norway, which is not an EU member but is part of the European Economic Area.

That means it is part of the single market.Such an alternative “seems plausible not just in terms of the country but in terms of where the MPs are,” she added, although “nobody knows if it can be done”.

The divorce agreement that May struck with the EU is widely opposed by British lawmakers across the spectrum, and her Conservative government must convince skeptical lawmakers that the deal is a good one ahead of Tuesday’s vote.

A defeat would sink the agreement, leaving the U.K. facing a messy “no-deal” Brexit, and could topple May and her government.Pro-Brexit lawmakers say the deal keeps Britain bound too closely to the EU, while pro-EU politicians say it erects barriers between the U.K. and its biggest trading partner and leaves many details of the future relationship undecided.

An analysis by Britain’s Press Association showed that just 27 of the 163 lawmakers who have spoken out indicated they would back the deal, compared with 122 — including 29 from May’s own Conservative Party — who say they will vote against it.

Pressure is mounting on May to delay the vote and ask for more concessions from the EU at a Brussels summit at the end of next week. EU officials have insisted that May’s Brexit deal is the best and only one on offer.