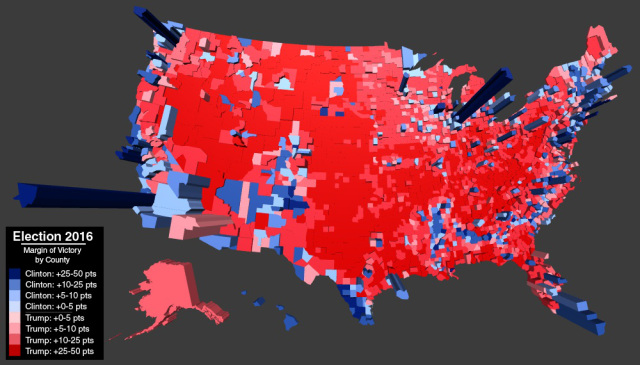 There are multiple visual tools used to capture and conceptualize data.  No doubt you’ve probably seen many graphs, charts and maps outlining the 2016 election results.  However, no single in…

Yes,GOP,the Media and Democrats-if you touch Trump-you will deal with a very unhappy group of millions. Therein lies the point of this blog entry.As supporters of the President WE elected we have to stick together. The opposition has 1 goal: Discourage and divide us.The one thing they fear is us.If they can kill his base,they can basically kill him.We have more power than you think but ONLY if we stick together. They know it or they wouldn’t be trying so hard. Remember how hard they tried to keep him from getting elected? Look what we did.We got him elected and they went into shock,then anger.
So that’s point no 1.

Point no 2 is even MORE critical.

Forget the inside munitions of the White House.The media chases those,so that should tell you everything you need to know.They’re rabbit trails. Let Trump handle the White House staff.Who comes and who goes doesn’t really matter. Trump is STILL President and he’s got some of the best people overall. He knows what he’s doing and if a correction needs to be made,he’ll get it done.

The media puts out the shiny object.We have to stay focused on what/who  can really damage the President.

That’s point no 3 and 4 is even MORE CRITICAL.

Keep  an eye on Congress. Look what they’re doing. They can’t topple the President while he’s in office.Seriously,that’s next to impossible.He’s not going to be impeached. The left is feeding that to their sheep to rile them up. If they want to keep their base intact they have to keep them engaged.They’re handing them lies;aided by their cohorts the media.For those that know their Civics ( they don’t)you’re aware that the chances of Trump being impeached are slim to none. The sheep on the left don’t even know they’re being duped. Impeachment is nothing to be concerned about. Besides,impeachment doesn’t necessarily lead to removal from office anyway.BTW.Nixon committed actual crimes and he was never impeached. He resigned under pressure.

The Republicans are restricting the executive branch. They can’t take him out.They know they can’t impeach him.All they can do is keep him from enacting his agenda and weaken his presidency. It’s exactly what they’re trying to do. They must think we’re stupid or that we’re going to throw in the towel.Harass them. Harass the media. Let’s be relentless.Prove them wrong on BOTH counts.

Keep in mind that some are working behind the scenes just like they did prior to his election. They’re lining up candidates to run against him in 2020. Also,keep track of who is standing up for Trump ,against the Mueller witch hunt and who is either silent or putting on a show.

I’m not going to attack Jeff Sessions.IMHO he was backed into a corner and had no choice but to recuse himself. Let’s suppose he just made a terrible mistake-it doesn’t even matter now.Mueller has been appointed and he’s impaneled a grand jury.An argument re Sessions is a waste of time & energy at this point. I will say this on his behalf;he’s the ONLY one from Congress that stepped out in support of Trump when a lot of Republicans were running for the hills. Whatever else you may think of Sessions that is absolutely true.

Let’s take apart the special counsel and the appointment of Mueller.

Begin with Comey.He obstructed justice with Loretta Lynch.He looked the other way with the crimes of Hillary Clinton.Finally he LIED under oath and actually LEAKED info with the purpose of setting up Mueller.Mueller should never have been appointed in the first place.You don’t break the law to get a special counsel.

Mueller has quite them team of lawyers lined up.Plenty of conflicts of interest.Hard to believe Rosenstein didn’t drop him right then and there.He’s leaking like a sieve too. More justification for Rosenstein to call it off.

The President is NOT going to fire Mueller. Deep state LIE.

If Mueller tries to nail Flynn or the Trump family-the President can always pardon them.No the President is NOT going to pardon himself.Another LIE.

He’s not under investigation and CANNOT be charged with a crime. The President-any President-has immunity. The President is not going to pardon himself because he is NOT going to be charged with any crime. Honestly, Mueller can’t really do much of anything with regards to our President-the ONLY thing he can do is put out info that might damage him personally and thus cast doubt on the 2020 election;maybe weaken his presidency to a certain extent or get his base to lose support. There ya go.That is the real intent of Mueller and everyone behind him.Look behind him and there you’ll see Lynch,Comey, Obama,Clinton,Soros, never Trump Republicans,the media-and all other operators of the Deep State.The Democrats like Mueller because it gives cover to the real crimes. The Never Trump Republicans like Mueller for their own agenda.They don’t have to say much.They let the Democrats and media do the attacking. They don’t oppose Mueller for the same reason-they’re not going to stand up for the President because they’re hoping Mueller can weaken his presidency. They are  same group of people who rolled over for Obama.If  only they had just fought against Obama as hard as they are Trump.

Caveat:  Take note of the few Republicans who DO have the President’s back. There are some. Also follow @Deplorables4US and get the word out about them.They’re supporting Pro Trump candidates.Woe to the candidates that claim to be Pro Trump if we get them elected and they turn too.

I was glad to see some mention today on Twitter of Rosenstein issuing a warning to Mueller.I’ll l have to look into that and see what to make of it before i get too celebratory.

Here’s how we WIN:

NEW Limited Edition, “CNN Home of The Nothin-Burger” FAKE NEWS MUG ONLY 50 Will Be PRODUCED.https://t.co/nySZ5bWkEK pic.twitter.com/pNwOeotEmP

Steve Bannon warned us: “If you think they will give you your country back without a fight, you are sadly mistaken.” pic.twitter.com/udGQ61XLy6

U.S. Attorney General Jeff Sessions has announced that four people have officially been charged over leaks that have occurred against the Trump administration, this as they launch their crackdown on such issues.

As written by BBC.com:

America’s top prosecutor said the administration has tripled the number of active leak probes since January.

At Friday’s news conference, the attorney general said no government could be effective when its leaders could not talk freely in confidence with foreign leaders.

“I strongly agree with the president and condemn in the strongest terms the staggering number of leaks undermining the ability of our government to protect this country,” he told reporters.