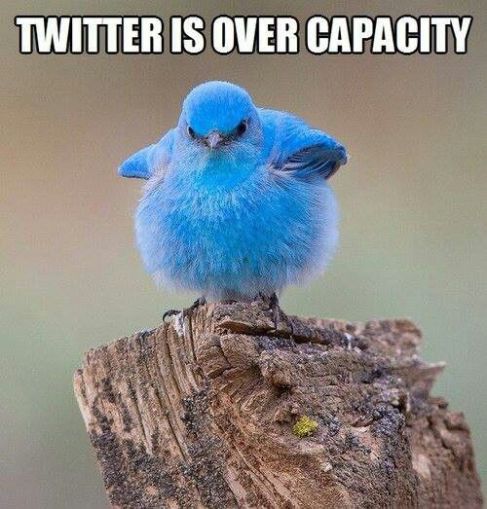 I am following 3,368 Peeples. I have 3,056 followers. Now I want to follow all the new followers. Nope.No can do. Why? Probably because some Twitter logithrim in the software has figured out that I have followed enough people already. Really Twitter? Yet the twitter software brings up suggestions to me and those people-nobody i have contacted personally-can be followed. Don’t know about you; I appreciate the suggestions but i’d kind of like to follow people of my own choosing.Especially people who have been kind enough to actually give me a follow.

Twitter has one up on Facebook.Facebook is even WORSE(which is why i’m more of a tweety bird). They’ve managed to set their site up so you can follow people you don’t know but you can’t follow people you do know. God forbid you step over their boundaries.

they actually ‘gulaged’ people who were truly out of line.I’ve watched some really nasty stuff get a pass and ppl having heated ‘discussions’ get locked out for next to nothing. We’re not there just to preach to the choir,right?

they would let you follow[back] as many people as follow you. Tired of getting stuck.